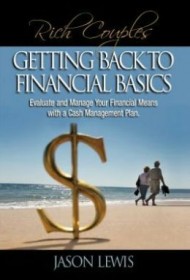 Jason Lewis, a former officer in the Army National Guard, offers a roadmap for financial success with his book Rich Couple$: Getting Back to Financial Basics.

In the foreword she pens for the book, Lewis’s wife Deserra answers the obvious question: Why another book on personal finance, and how is this one different from others? The answer is that Lewis takes a very narrow, action-oriented approach to finance. There’s little discussion about the intricacies of different types of assets, insurances, or other aspects of personal financial planning. As its name implies, Getting Back to Financial Basics focuses on just that, the basics: spending less money than one’s income provides and saving the difference wisely.

To that end, aside from frequent, enthusiastic prompts to “take ACTION!” Lewis is somewhat short on explanations but well-stocked with worksheets and other tools. The book’s biggest weakness is a lack of professional editing: Misspellings and misplaced punctuation pepper the text, as in: “For example, if you chose, [sic] security as one of your top values, then one of your financial goals could be on a specific date to, [sic] start putting aside 10 percent of your income for your families [sic] emergency fund.” While the message gets delivered, it’s garbled and loses some of its impact.

Although Lewis attempts to address the issue of having many competitors in this category of titles, he fails to distinguish his book when the opportunity allows: In his preface, for example, he talks about unwisely blowing $30,000 in six months, but never shares the details that would allow readers to learn from his mistake. What’s left is a book that largely repeats concepts and quotations found in similar financial books and presents the material needed to begin tracking one’s own finances. For readers who might find a comprehensive financial planning guide overwhelming, Rich Couples could be a good place to start, but it’s rather slight on information overall.