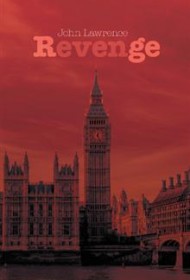 Revenge may be sweet, but does it satisfy? That’s the dilemma that faces Bobby Chalker and sets the tone in Revenge, a mystery-thriller with a bit of James Bond techno-spy gadgetry thrown in.

British author John Lawrence’s Revenge is a mostly breezy read. The revenge centers on payback against a rich, arrogant doctor who had dismissed the symptoms of breast cancer in Bobby’s lover, Joanne, which hastened her death. The story offers a gender bender shocker that Lawrence slyly reveals — a revelation done so well it will no doubt stop readers mid-paragraph with a, “Wait, what?

The author has a good grasp of tension building, letting the details of Bobby’s past slowly unfold. The writing is crisp, and there is a sense of melancholy that surrounds Bobby, which makes the longing for revenge believable and palatable. “I wanted him to suffer as Joanne and I had done, as I had gone from being a loner to being loved and back to being a loner again…”

But the book ultimately fails from an uneven and slack plot. In the best of the genre, every moment is taut, the narrative stripped of any superfluousness. Even a brief character appearance or seemingly random happening will become significant by the denouement. In Revenge, however, much is made of Bobby’s inheritance of a spectacular house with every conceivable security device. Supposedly this will at last enable Bobby to embark on his plot for revenge. Yet for all the secret codes and armament, the final plan is fairly simple, and none of the newfound riches are needed. The same is true with Bobby’s relationship with former Army colleagues. It’s unclear how – or why — they fit in. Readers waiting for the dots to be connected will be disappointed.

Lawrence has the lively imagination of an author who could craft a good cat-and-mouse tale, but in failing to tighten the plot he sadly misses the mark.