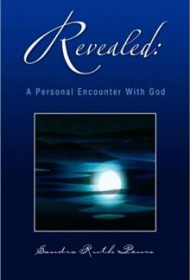 Sandra Ruth Penro’s book of poems Revealed: A Personal Encounter with God is made with uncluttered language and is permeated by a positive “can-do” attitude. While Penro asks God in the poem “My Prayer” to “Bless [her],” she also asks God to “make [her] a blessing” to God, to others, to the world. This approach of equilibrium between God’s will and personal responsibility animates this collection.

The strongest section of Penro’s book is “Memories, Memories,” which contains works with lively details. In poems such as “That’s Not My Name,” aspects of Penro’s African American culture are inscribed: “Dark, dark-skinned they’d simply call you Blue. /… Light-skinned, you were sometimes called YELLA/ Clueless or confused, where I grew up, you’d be called Dora.”

Other poems set in the American South contain charming regional descriptions, such as “1263 Indian Trail,” which is pleasingly imagistic: “Honey-sucker vines / Blackberries in the thickets / … Red plums and peach trees / Black gum and shiny oak leaves.”

Unfortunately, throughout the book there are also several poems that are too abstract to have much emotional impact. The weakest section is “Bible Characters.” The likes of Ruth and Cain are overly familiar, and in poems like “Jonah’s Dilemma,” the rhymes exacerbate the numbing effect of clichÃ©s: “It’s easy to praise God / When all is well. / But what if the bottom falls out, / And life’s a living hell?”

While “God” is in the title of this book, these poems seem grounded in real world experience. The poetry is not sophisticated in its techniques, but Penro’s voice, especially when describing childhood memories, has an undeniable glow.