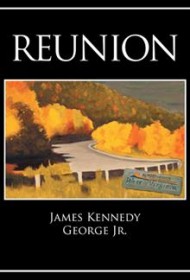 The novel Reunion mostly details the experiences of a teenage boy growing up in Princeton, West Virginia, in the late 1950s. It’s largely an autobiographical tale, with narrator Jimmy Jackson acting as proxy for the author. The story highlights Jimmy’s high school experiences, which include assisting a rock ‘n roll band, working as a manager for the football team, engaging his interests in radio, and dating. The book also explores more dramatic elements, particularly segregation in Princeton and Jimmy’s alcoholic father.

Reunion has a number of strong points. The author weaves in rich detail about life in Princeton, just enough to put the reader there without slowing down the story. Characters and dialogue ring true throughout, and George convincingly mines suspense from a drag racing incident and pathos from Jimmy’s relationship with his father.

However, Reunion would have fared better had it been written as a memoir, because it simply doesn’t provide a sufficiently interesting story for an autobiographical novel. Jimmy’s experiences assisting (not playing with) the band and football team aren’t especially compelling. The segments about radio suggest a payoff where Jimmy will ultimately be an on-air talent, but that never happens.

These sorts of issues illustrate the need to employ dramatic license in a novel. While the events of Reunion clearly reflect the author’s real-life experiences, just because something happened doesn’t mean it needs to be in the story–especially if it doesn’t play an important role in crafting a satisfying and complete narrative arc. While Reunion isn’t likely to have wide appeal, George does have talent, and one hopes he’ll let his creative juices flow on a future novel that’s not so constrained by real life.