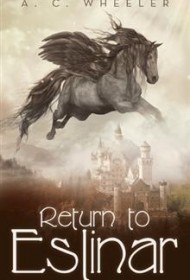 A.C. Wheeler doesn’t set out to fulfill any grand narrative ambitions in Return to Eslinar. At 195 pages, Wheeler’s foray into the fantasy world is a straightforward affair, featuring little in the way of complex mythology and intricate backstory. Instead, the author sticks to the basic thematic cornerstones of the genre: an unassuming protagonist, a villain bent on pure evil and an epic battle between the two.

In Wheeler’s world, the hero is Sarah, a young woman who quits her high-stress job and sets out on vacation to find her true purpose. On the first night of her getaway, she falls asleep and wakes to find herself in a different world. In a plot twist straight out Lewis Carroll, Sarah finds herself transported to a realm called Hofflinar, part of a larger world that hosts fantastical creatures and evil forces. Sarah is befriended by a Halfling with pointed ears and crinkled skin named Tinbe who helps her take her first steps on a journey of self-discovery and heroics.

Tinbe is the first in a new set of allies in what turns out to be a battle against the Dark Lord, a baddie who’s set on destruction. Sarah discovers that her fate has always been tied to the faraway world and its inhabitants; she finds her destiny is intimately tied to the defeat of the Dark Lord.

This is a simple premise, one that Wheeler brings to life with a straightforward, crisp writing style. The author opts for simple descriptions and characterizations in lieu of creating a dense mythology and a complex backstory. Such simplicity may be lacking for hardcore fantasy fans—readers accustomed to drawn-out legends and adventures that span hundreds and hundreds of pages. For those looking for a quick getaway to another world, however, Wheeler provides an easy, enjoyable escape in Eslinar.