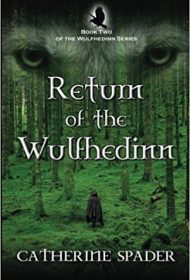 Set in 782 Europe, the second installment of Catherine Spader’s stellar Wulfhedinn saga (after 2016’s Feast of the Raven) continues to chronicle the life of Gerwulf, the being allegedly created after a Frankish woman was raped by a Saxon demon wolf warrior known as Wulfhedinn. The story focuses on the spiritual journey of self-discovery of this proverbial loner—he is neither Saxon nor Frank, Christian nor pagan—who is both beast and man.

Having finally escaped the clutches of the Saxon rebels—led by the Walkyrie, their mystical (and alluring) shield maiden Vala—Gerwulf heroically returns to the Christian lands of King Karl where he tries to subdue the beast inside of him and be a dutiful scout and huntsman for his king. But life under Karl and his callous leaders is hard, especially when Gerwulf sees firsthand the bloody destruction that has come from the king’s obsession with building a road into the Saxon’s remote settlements. At night, he’s haunted by the Walkyrie; he can smell her scent of “sweet musk and hawthorn” in the wind calling him back.

As the conflict intensifies, Gerwulf becomes an increasingly important component in Karl’s army—but the horrors of war finally reveal his true path.

Unfortunately, the same issue that detracted from the first novel hampers its sequel; the ending is conspicuously weak, simply a respite until the next novel. That said, this remains a highly engaging read. The fusion of medieval fiction and Germanic myth coupled with Spader’s rich, immersive writing style create an utterly readable narrative. The action is nonstop, and the main characters are fully described and believable. Gerwulf, in particular, is a remarkably complex character, and his world is both magical and visceral.

Finally, the thematic depth of this series is subtle but profound, examining not only the relationship between religious belief and war but also the consequences of intolerance, ignorance, and fear.