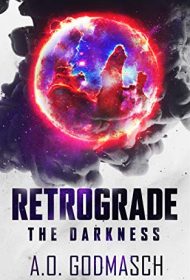 A fast-paced science fiction adventure, the first installment of A.O.Godmasch’s duology is set on the planet Damara as it prepares for the Retrograde, an occurrence that afflicts the planet every decade with a deadly fog that instantly disintegrates its victims or, worse yet, turns them into murderous, zombie-like changelings.

The story revolves largely around Isis Mahmoud. She’s the daughter of the president of a prosperous nation who rejects her mother’s pleas to stay safe underground during the event and instead trains as a soldier to protect the country from the devastation. As the Copper Moons approach in the sky—a herald of death and destruction to come—Isis understands the gravity of her decision to fight. The coming Retrograde is supposed to be the worst yet and one wrong move can mean not only her death but the end of any chance at a future with Khalfani Abaza, a handsome soldier who has become a surrogate son of sorts to her father.

As the dark fog rolls in, Isis and Khalfani are unaware of another adversary even more deadly than the mist: Khalfani’s father, who the author writes was “chosen by the Darkness to help extend the Retrograde’s reach and ultimately destroy [the] planet.”

Although the storyline is a relatively predictable good versus evil conflict, the author seeds it with potentially intriguing plot revelations, which would be spoilers to list. Relentless pacing and Isis’ character depth are strengths; she’s identifiable, and readers will undoubtedly root for her.

There are issues, however. The secondary characters are cardboard, the world-building and character description is superficial at best, and there are large plot holes regarding Khalfani’s father and the aforementioned revelations. Although these questions may be explained in Book Two, the result here is confusion and an overall lack of clarity.

While a flawed read, Retrograde is fast and fun nonetheless and will have readers looking forward to the sequel for answers