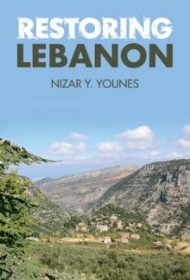 On January 1, 1944, France released its mandate to govern Lebanon. Since then, Lebanon has undergone a 15-year civil war, a 29-year occupation by Syria, numerous conflicts with Israel, political assassinations and continued civil unrest. In Restoring Lebanon, Nizar Younes claims that the way back from this destructive turmoil must involve replacing Lebanon’s confessional system of government with a “democratic parliamentary system…based on the separation and balance of powers.” This replacement, he states, was prescribed by the 1989 Taif Agreement (ending the Lebanon civil war) but has yet to be implemented.

Lebanese confessionalism apportions political power among its disparate religious sects, causing, writes Younes, factional struggles between sectarian representatives trying to hold and increase the “size of their shares.” It also leads to corruption, clientelism and an impasse between factions, all of which have caused, Younes asserts, a breakdown of the country’s infrastructure.

In particular, he points to “large-scale issues of corruption” relating to electricity and “the mismanagement of the solid waste problem.” In addition, he states that the disproportionate allocation of power among the religious factions and a resulting sense of inequity led to the civil war. Notably, he claims, “the strongest motive” for the war “was the injustice visited upon…Shiite Muslims due to the monopolization of power by…Marionite leaders.”

Younes touches on Lebanon’s history from the Ottoman Empire forward and discusses ways to restore the country’s prosperity, such as privatizing utilities and encouraging culture. Much of his book, however, is devoted to rhetoric with unsupported statements beginning with phrases like, “Public opinion was aware,” and “Some believe.” Younes also glosses over some of the situations he describes, in particular, the PLO’s significant role in the Lebanese civil war. Repetition also mars this book. For instance, the author frequently revisits the Taif agreement and the role of the president.

Although this book might interest some readers with an affinity for all things Lebanon, careful editing to address the issues mentioned would widen its appeal.