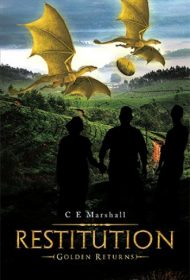 Restitution: Golden Returns tracks the journey of a couple working desperately to fit into a new world.

The couple, Chris and Mary, have newly transformed from humans to a race called Dragonia, which resembles the dragons of myth and legend. But they aren’t average members of the Dragonia brood: They’re Goldens, a rare group with its own mysterious history and set of powers.

At the book’s outset, the two have little in the way of context regarding their transformation. Clues to their new existence come from the rest of the Dragonia of Traymar, the human couple’s new home planet. With the aid of Traymar’s residents and ruling council, the couple discovers powers ranging from healing to magic spells. They uncover the House of the Golds, the residence of long-disappeared members of their current breed. Their journey of discovery continues through the birth of a child and voyages to other worlds to aid displaced populations and discover the secrets of their own roots.

Throughout, author C.E. Marshall returns to the theme of friendship and connection. Because Golds boast a questionable legacy in Traymar society, Chris and Mary struggle to create trust and amity. “I wish you’d understand that we want to be friends, close friends, not people you should be in awe of,” Chris tells a council member intent on subservience.

Restitution is the third installment in a series, and Marshall offers little in the way of context or background. Newcomers to the series must learn on the fly. Thankfully, Marshall’s narrative pace is steady and purposeful, and he writes with clarity. The action here is moderate—there’s little in the way of epic battles or daunting villains. Instead, the story relies on the plot note of self-discovery and gradual exposition.

That structure may leave those seeking standard fantasy fireworks a bit disappointed. Even so, it allows Marshall to offer some universal observations about connection and prejudice, magic and interstellar travel that readers might appreciate.