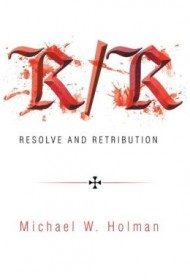 Resolve and Retribution is an original genre novel sure to delight resolute vampire aficionados.

Ben Hammonds is a seemingly ordinary fellow with a data-entry job at the Oregon Division of Motor Vehicles and a passion for running. He is surprised to discover he’s had a vampire guardian, Tabitha, since childhood. Tabitha is a 17th century English noblewoman who was turned into a vampire at 18; her world has strict rules and is headed by an all-female council of vampires called the Matriarchs.

Ben and Tabitha fall in love, adding to the intrigue, especially when Lilith, a renegade vampire, overturns both their worlds. Ben also discovers that his ancestry is bound up with these women and he’s the only one who can defeat Lilith. In the midst of everything, he also still has to show up for his job.

Michael W. Holman’s vampires and humans are multidimensional, and he wittily weaves the vampires’ origins from Old Testament sources with Lilith’s roots from ancient Near Eastern myth. The story, told through Ben’s eyes, offers compelling views of his loyalty, discipline, and wit. His supporting characters include his father, two sisters, Tabitha, and friend Joe Netters, an older African-American who doesn’t balk when confronting the forces that threaten Ben’s life.

The only drawback to this fantasy comes early, when Ben learns how his lineage is connected to the vampire world through an unbroken conversation with Tabitha and her mother that plods at times. Apparently Holman was still developing their voices, as they sometimes speak as if they were from the 21st century. Tabitha refers to her parents as “Mum” and “Daddy,” informal for a daughter of nobility born over 400 years ago. Midway through the novel, however, their voices become distinct and believable, and the story advances nicely in plot and character.

The satisfying ending leaves readers hoping for more. Fortunately, they won’t have to wait long: Holman is already at work on a second book.