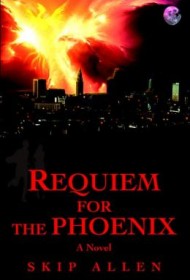 It’s been two years since federal agents Matt and Annie Garret foiled an al Qaeda biological attack on America, but the terrorists don’t give up so easily. They’re about to unleash a bigger and badder attack, the most shocking since 9/11 … and the Garrets (with a few new helpers) are back on defense.

Requiem is Allen’s 2006 sequel to Out of the Ashes, his 2004 thriller about that foiled July 4 terrorist attack by al Qaeda on America’s Heartland. It describes the inner workings of the terrorist mindset and demonstrates a wave of terror that al Qaida can–if left unchecked–unleash upon the free world.

Requiem offers a number of pluses: It has a credible plot with reasonably well-developed characters and an ambitious premise that’s laudable. Much has happened in the real world since 2006—namely the killing of Osama bin Laden, the election of a Democrat as U.S. president, and the exposure of NSA surveillance that goes deeper than anyone imagined. A number of hit TV series, such as 24 and Homeland, have also influenced what we expect from our counter-terrorism storytelling. Despite the fact that the novel was written many years ago, the story still seems timely and relevant.

But the novel juggles far too many key characters in a labyrinthine plot that spans 464 pages—roughly twice the length of an ordinary commercial thriller. Character back-stories, recaps, and a few sex scenes consume a big chunk, so the story ebbs and flows across time and settings, giving readers a real workout. The book would have benefitted from a solid trim.

The novel has epic bulk and an epic cast, but the story feels more like an endless Jack Bauer-meets-Carrie Mathison marathon than taut reading experience. There’s enough action for die-hard fans of political thrillers but others might feel that it’s as interminable as the War on Terror itself.