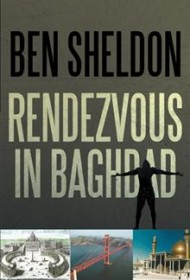 Rendezvous in Baghdad charts the course of Sami Yusef, an Iraqi native turned U.S. Air Force pilot, as he sets out to avenge his childhood sexual abuse by a priest at private Catholic school where he was sent for safety and a good education.

The story opens as Sami, a gay man spending time with his love before leaving for Europe, learns via television that the priest who assaulted him has been elected Pope. Sami explains to his friend that in order to restore honor to his Muslim family, he must be killed or else he must kill the Pope — the latter being the only way he can again see his ailing father. So begin his plans.

If it is, at first glance, a seemingly impossible task, author Ben Sheldon does a good job of creating a believable plan, beginning with Sami’s transfer from California to Italy: “Colonel Yusef gave the order to fully fuel the newest F-16 fighter jet …” Sheldon writes. “It was the eve of Easter Sunday. Sami got easy approval from the Base Commander, to make up for lost winter time. … Little did they know. Not even a slight hint ever leaked out from Sami, as to what they were helping him do.”

But while the initial plan is well enough thought out, the ending defies reality and is simply too pat, even ‘wink-wink’ humorous. The rest of the book suffers from an odd switch in tone; while the story begins seeped in drag queen and nightclub culture with an irreverent and light tone, that later feels out of sync with the heavy task on which Sami is about to embark.

Overall, this an interesting read by an author who clearly knows his material – Middle East politics, the gay community, the Catholic Church, history – but a little more work on technique, particularly eliminating the overuse of the word “then” (such as “He then …” ) and a more plausible ending would greatly improve it.