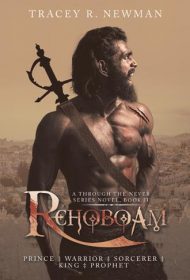 A blend of Biblical myth and historical fiction, the second installment in Tracey R. Newman’s action-packed Through the Never saga (after 2016’s Illusion) continues the story of the eternal struggle between divine siblings Ialdaboath and Ialdaba, the omnipotent embodiments of Light and Darkness, with a prophecy concerning the son of Solomon at its narrative center.

After numerous attempts on King Solomon’s life, Solomon and his warrior son Rehoboam aim to identify and defeat those plotting to put an end to Solomon’s reign. But with Rehoboam in a coma after a particularly bloody battle and his pregnant wife abducted, those fighting for Solomon are faced with powerful enemies, including Lucifer himself.

While the historical fiction aspect of this story—the life of Rehoboam, heir to the throne of Israel and son of King Solomon and Queen Naamah—is certainly appealing, as is the spiritual battle between Good and Evil, it’s Newman’s impressive ability to transform a scene through imagery that makes this a memorable read. Countless sequences jump off the page because of the author’s rich writing style: “…his jaw falling slack as he watched cascades of angels plummet out of the tumultuous sky and thud onto the forest floor like so many massacred birds…”

The major flaw here, however, is the story’s inability to stand alone. Readers who have yet to experience the series’ first book will be hopelessly lost, as the author does nothing at the beginning of this novel to get readers up to speed. Tobias Alger and Nick Piper, archeologists in 2016 Bolivia who were central to Book One, aren’t even mentioned until novel’s end. The saga’s overriding story arc, which spans millennia, is richly described and thematically powerful, but this lapse weakens that power and negatively impacts the overall reading experience.

All told, this is an ambitious but flawed story about Biblical myth and prophecy, powered by impressive imagery throughout.