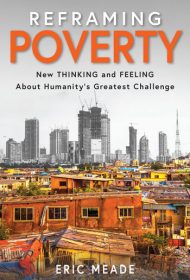 In Reframing Poverty, Eric Meade offers a nuanced and scholarly perspective on poverty that reframes the debate over its antecedents and its resolution.

In Part I of his work, Meade declares, “[p]overty…is an emotional construct,” and our emotive response should play a significant role in its definition. Meade applies this argument to four explanations of poverty, namely the structural (systemic barriers), contextual (the stress of scarcity), cultural (community dynamics) and behavioral (individual bad decisions). Meade crafts a “broader way of thinking about poverty that integrates the valid aspects of each [perspective].”

In Part II, Meade offers a “non-linear” approach to examining these explanations. He declares, “the path out of poverty…is…ever-changing…” He links socio-economic class to theories of psychological development, and finds that poverty emerges when individuals lack the sophistication to effectively engage with the challenges presented by their environment. Meade “change[s] the research question from ‘what works?’ to ‘what works where and when and why?’”

Meade’s writing is lucid, and his arguments are persuasive. He demonstrates the breadth of his research by buttressing his writing with a wide range of citations from social scientists (such as John Kenneth Galbraith) to mathematicians (Isaac Newton) and even activists and poets (Martin Luther King and Robert Frost). He also does an excellent job of employing charts and illustrations to make his positions more accessible: For example, his use of the carnival game Plinko and Russian nesting dolls to explain certain concepts are particularly illuminating.

Lay-readers may find Part II of Meade’s work challenging, especially when he turns to chaos theory to elaborate on the non-linear nature of poverty. In spite of this complexity, however, general readers will find the book a rewarding reading experience.

With Reframing Poverty, Meade has created a valuable work that offers an insightful method for examining poverty and seeking solutions to this pervasive problem.