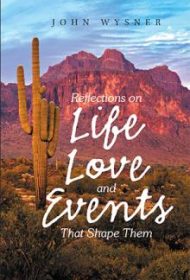 “At seventy-three,” John Wysner writes in his essay collection, he has had experiences that enable him “to speak with a learned, experienced and honest voice.” That voice is evident throughout Reflections on Life, Love and Events That Shape Them.

In these 13 essays, Wysner reflects an established sense of values. Thus, in his essay about his father, the author states “[h]e was a good man, a kind man, and an honest man.” In his profile of Anne Frank, he contends that the example of her life “gives us the assurance that love and giving, while they will always be in contention with those of [sic] evil, will ultimately triumph.”

Eight of Wysner’s pieces explore personal topics, such as musings on his wife, father, stepmother, friend, dog, horse, and more. Although heartfelt tributes, they are likely to interest family and friends who know the subjects more than general readers.

The other essays range from the profile of Anne Frank, to the shortcomings of the American health care system, to Trump’s destructive inroads on the Constitution. The two essays on the health care system are the most effective because they are written from the perspective of the author’s experiences with a stroke, bipolar depression and traumatic brain injury. Among the health care system deficiencies, Wysner notes a “disconnect between medical specialists that limits the exchange of medical knowledge between doctors and institutions.”

Although these latter topics may interest readers, the book features numerous typos, fragments, and garbled sentences: “The most troubling aspect of what’s happening in the current process is the separation of the children from their parents and being retained in one site at an empty Walmart facility, and when that has be [sic] filled, intents [sic]”. Editorial slips also undermine the author’s authority; for instance, he lists the Quran and Koran as two separate books.

These problems, combined with the prevalence of essays of minimal interest to outsiders, will likely limit the book’s overall appeal.