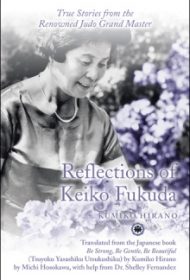 Translated from the original title, Be Strong, Be Gentle, Be Beautiful, after Judo Grand Master Keiko Fukuda’s teaching motto, this book captures stories from a great teacher who vastly exceeded expectations and changed the perception of her sport around the world.

Author Kumiko Hirano interviewed Fukuda in her San Francisco home over one week in 2012; at that time, she was 99 years old. She shares how, as a young woman living in rural Japan, she was learning the household skills to make her marriageable when life offered another path. “I reached the turning point of my life before my twenty-first birthday,” she says. A teacher with a distant connection to the family invited her to explore judo at a local dojo. Despite social prohibitions against women in certain sports, Fukuda’s mother allowed it, thinking her daughter might meet a husband. Instead, she found her life’s calling.

Advancing in the sport and eventually teaching around the world, Fukuda ultimately opened a dojo on San Francisco’s Castro Street in the 1970’s. Co-translator Shelley Fernandez, Fukuda’s life partner, initially invited Fukuda to work from her home and helped her get U.S. citizenship, which allowed her to teach in schools around the country. They worked together to grow the dojo, and it’s clear from the collected remembrances included at book’s end that her impact as a teacher continues after her death.

The translation is crisp and easy to read, though occasionally Fukuda’s thoughts wander, as they might at age 99. Throughout, Fukuda is sly and funny, gently complaining that her partner is a bad cook, for example. She admits she’s antisocial and overly serious but says people want her as a teacher because, unlike others before her, she promotes the spiritual discipline of martial arts. There’s an extensive glossary at the end—even “tofu” is explained.

A great testimony to the power of following your passion where it leads, Reflections of Keiko Fukuda is an inspiring read.