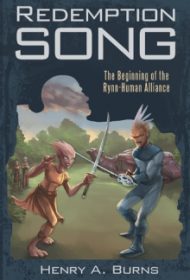 Henry A. Burns’s Redemption Song is a science fiction adventure chronicling the intertwined destinies of humanity and an alien race called the Rynn.

Kasumi, a young Rynn woman, is stranded on Earth as a result of a mutiny on her ship, and Jeremy, an aging human widower (and notable martial arts expert) discovers her and nurses her back to health. Ultimately, he trains her to defeat her enemy and return to power. Then together they begin to form the first inter-species alliance, fighting to preserve a United States that has descended into civil war and preparing for the threat of even greater interstellar conflicts.

While the plot is promising, Redemption Song reads a little like multiple novels stuck together. The first act, featuring Jeremy and Kasumi learning to trust one another, culminates in an extended training montage and Kasumi’s victory over the forces that have stranded her.  (This “first contact” story unfolds hastily, with Jeremy seeming a little too quick to adjust to his unprecedented discovery.)  Immediately after that, we are thrust into an American civil war that seems to lead in a completely new direction. Once we’ve settled in for that ride, new alien threats are introduced.

Redemption Song is filled with fast-paced action sequences, political intrigues, and light romance, never taking itself too seriously. Sometimes, though, it borders on ridiculous. For example, Mel, Jeremy’s granddaughter, falls head over heels for Kasumi, and their relationship advances to the Rynn-equivalent of marriage—all in the course of a single, short chapter. And she’s not alone; most of the Rynn characters find their own enthusiastic human sex partners almost immediately, and improbably. Additionally, Burns writes compelling action and credible dialogue, but he’s less adept at developing character motivations.

Overall, Redemption Song seems like a project that perhaps grew beyond the bounds the author had initially imagined. That said, sci-fi junkies who are willing to suspend their disbelief will find this a fun ride.