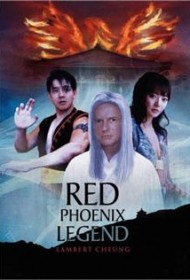 Kung fu tales—especially wuxia-style depictions of kung fu that add wizardry to the host of physical and mental skills gained by those who study the martial arts—have captivated people for thousands of years. There seems to be something irresistible about these stories with their themes of martial prowess, lost love, honor, revenge, intense training, and fate, and it is this tradition that infuses Lambert Cheung’s Red Phoenix Legend.

The story’s hero is a young man called Jasai. Typical of the protagonists of wuxia novels and films, he is an orphan, raised by his demanding but loving teacher who has passed onto him all he knows about being a superlative warrior; he likes a girl in his charmingly traditional village but is too shy to talk to her; and when he learns that he’s actually the last living member of a now-extinct clan of martial artists who dared oppose the evil usurping Emperor, he knows he must avenge his people and country. Now, that’s not to say there’s nothing original in Red Phoenix Legend—simply that the setup is evocative and familiar for Hong Kong cinema enthusiasts and fans of wuxia novels.

Anyone intrigued by the above description will likely find this story enjoyable. Yet the book is not without problems, even for the novel’s built-in fan base. Red Phoenix Legend would have greatly benefited from professional editing: repetitious language (for example, Jasai’s horse is described as a “trusted steed” thrice in two pages) and uneven pacing often drag down the story.

That said, the author’s appealing honesty and enthusiasm for the subject matter allow readers to forgive many of the missteps. Overall, fans of Hong Kong cinema, wuxia films and novels, and Avatar the Last Airbender are likely to enjoy this story. In addition, anyone looking to take a break from the World of Warcraft Mists of Pandaria expansion may find this book an appropriate escape.