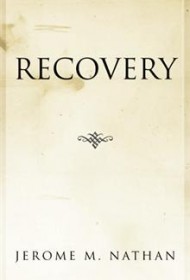 Recovery is a slim novel with a subtle yet weighty message. The narrator is Victor Best, a 68-year-old psychotherapist in West Los Angeles who has practiced for 30 years. A year earlier, his wife, Martha, died of cancer and Victor can’t seem to stop grieving. Nevertheless, Victor continues doing what he always did–seeing patients and helping them grapple with their personal issues and traumas.

While he thought that working would help relieve the pain over losing Martha, he realizes that instead, his patients’ misery only aggravates his own. Victor begins to seriously doubt his own ability to help others when tragedy strikes. For example, Bill, who is wheelchair bound, is run over by his wife Joyce, and Victor, who counseled them both, can’t be sure if this was a case of suicide or murder. He wonders whether he sent them the wrong message through his advice. Likewise, despondent Gloria calls to tell Victor she is about to jump from a hotel roof. Though he tries to talk her out of it, his words prove ineffective. Through numerous encounters with patients, Victor begins to see that he is in need of his own emotional life preserver if he is to ever get on with his life without Martha.

Jerome M. Nathan’s novel is neither action- nor emotion-packed and is written in a spare narrative style. Nonetheless, it effectively conveys the deep emotions, confusion and fears that lurk within us all, even someone trained to ease pain in others. To his credit, the author doesn’t tack on a happily-ever-after ending, but only hints that some things begin to make a turn for the better at the book’s close.

Recovery is thought-provoking and nicely paced. It likely would appeal to a wide audience because it shares the message that we all are uniquely connected through our pain, grief and emotional suffering, and that sometimes that connection can lead toward a breakthrough.