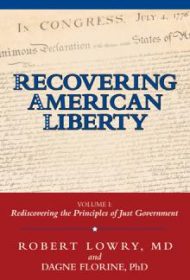 In this timely tome, authors Robert Lowry and Dagne Florine argue at length that America’s transformation into “humanistic democratic socialism” constitutes a threat to liberty as great as any foreign or domestic enemy.

Americans are treading this dangerous path, they write, because they no longer believe that the inalienable “natural” rights of “life, liberty and the pursuit of happiness” were handed down directly from God. Instead, too many Americans have mistakenly come to believe that those rights were endowed by government, in opposition to the Founder’s widely shared conviction of God-given rights that arose from the Judeo-Christian ethic as rediscovered in the Reformation.

To make their case, the authors offer a detailed, lengthy discourse on why each of the Declaration of Independence’s well-known phrases were unquestionably endowed by their Creator. The implications of their construct will be controversial, even intemperate, for some. For example, the authors question the legitimacy of the tax, banking, currency and welfare systems. They criticize the Supreme Court for creating a record of “muddied” decisions by failing to apply the first-principle that rights are God-given.

While some might find the argument old-fashioned and irrelevant, it’s supported by extensive research. Even for skeptics, the book should be an interesting exploration into the thinking and events that culminated in American independence.

Unfortunately, the book’s excessive redundancy greatly hampers its mission. Readers are reminded so often that the Founders believed the inalienable rights are God-given and that Americans have strayed from that belief that it begins to feel patronizing, as if the authors believe their audience isn’t paying attention. Additionally, chapters so frequently repeat the information that precedes them that any new point being made is lost. This issue could easily discourage readers from finishing the book.

Those who can persevere through the excessive repetition will find a well-documented argument. But a shorter, more focused text would better serve the authors.