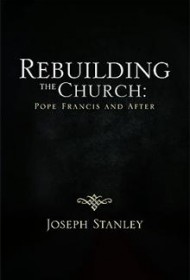 The book offers four essays, two by Joseph Stanley, a pseudonym for a university teacher with a background in civil law, philosophy, Buddhism and Christianity.

Stanley speculates that Pope Francis, age 76, will choose to retire after ten years. In these years, John Paul II and Benedict XVI appointees will have aged out of office. Bishops appointed by Francis, Stanley predicts, will be chosen as candidates for pope for “their concern for the poor.” He expects we will see “a new attitude of open discussion…and a wider sense of collegiality.”

Stanley also expects the next pope will be Italian and will facilitate, among other ideas, more open communication with Jews and Muslims, reconciliation with the Eastern Church, a move to genuine dialogue with the modern world, and the appointment of women as papal nuncios by 2039. This will be followed, he predicts, by the widespread ordination of women deacons and the appointment of women as cardinals and leaders of the Roman Curia by the year 2050.

Stanley’s prose is spritely, backed by extensive endnote documentation. His pieces are followed by two short contributions from now-deceased Catholic leaders of the Vatican II era, who address such topics as: how a faithful Catholic can honor the church’s authority while also dissenting from some teachings; how change comes about; and the transitioning role of women in the church.

This book is an exuberant exercise in speculation that can provide guidance and inspiration to Catholic Church reform leaders. For lay and clergy leaders, especially those interested in implementing the reforms called for in the Second Vatican Council, these essays provide a useful prompt for creative thinking and action.