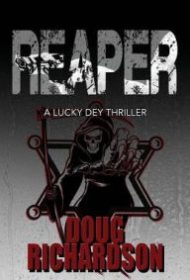 Author Doug Richardson has penned screenplays for hugely popular cop movies such as Bad Boys and Hostage. In Reaper, he turns his vision to the mean streets of L.A., delivering his second novel about Sheriff’s Deputy Lucas “Lucky” Dey, following 99 Percent Kill.

This new entry falls tonally somewhere between Chinatown and the visceral street politics of The Wire. Lucky has been busted back to patrolling the streets of Compton as he mentors rookie Shia Saint George. This community exists geographically in that nebulous region between the richest and poorest denizens of Los Angeles, and Richardson juggles dozens of characters — including gangbangers, cops, a movie mogul and a cold-blooded assassin — in a byzantine plot that unfolds over a few days as Lucky and Shia investigate a series of “ghettocides” that may or may not be gang-related.

Richardson’s Lucky is a fascinating character. Not only is the part-time cop a former member of a rogue faction embedded in the sheriff’s department, but he’s also a recovering drug addict whose only allegiances are to his family, his partner, and his own bent code of honor.

The book’s greatest strength, perhaps, lies in its precision and delivery: The author has clearly done his homework on the realities of police work and can paint a thrilling picture of the scene, whether it’s a full-on gunfight or the profane banter between partners. For example, Lucky offers insight into the often-ambiguous nature of police work when talking about his tattoo:  “So it’s not just about a tat.  There’s a meaning to it. And an oath. And, if you were on the outside lookin’ in, it might’ve looked like Reapers were some gang inside the Sheriff’s Department. And who knows? Maybe we were.”

Despite a plot and cast that can sometimes seem oversized, crime enthusiasts looking for a cinematic reading experience to rival the likes of Michael Mann’s Heat will find precisely what they’re looking for in the pages of Reaper.