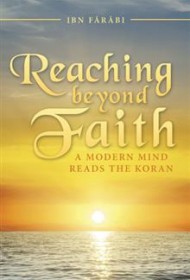 In Reaching Beyond Faith, author Ibn Fārābi, takes a critical look at the Koran, approaching the 1,400 year-old holy book with a contemporary and critical eye. Writing under a pseudonym (“The guise would have been unnecessary in a more tolerant Islamic world,” he notes), Fārābi presents a series of exegeses that examine how the Koran was constructed; how to navigate some of its more difficult passages; the true nature of jihad; the existence of heaven and hell; and the roles of husband and wife, to name just a few.

At the heart of the book is a single question: Should the Koran be read in the 21st century the same way it was read in the 7th century? Fārābi’s answer is no. Societies and peoples evolve, he argues. What made sense a thousand years ago needs to be re-interpreted in the modern world.

For instance, in regards to the modesty of women, he writes, “Whatever interpretation we put on verses of the Koran regarding dress codes for women must also be seen in the context of the time. Women’s attire that would have been considered morally provocative at that time may be perfectly normal and devoid of any unethical overtones today.” To do so, Fārābi admits, is to toss aside hundreds of years of social, cultural, and intellectual developments: “The dilemma between reason and belief is a real and most difficult one. But merely shutting our eyes to that reality would not make the dilemma go away.”

Fārābi is a competent writer with a simple, terse style that’s easy to follow. Well-footnoted, his approach is levelheaded and sincere. Readers will sense a certain level of frustration, reflecting the author’s disapproval about religious violence and blind fundamentalism, as he argues for the use of reason in exploring the Koran. Overall, Fārābi has produced a thought-provoking work that will spur discerning readers to reevaluate what they might think they know about this holy book.