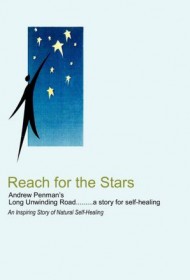 Early in the morning on March 6, 1989, a very intoxicated Andrew Penman, 26-year-old builder, bricklayer and would-be rugby player, was struck by a car near a bridge in Cardiff, Wales. The resulting injury, which caused “massive bruising, broken ribs and brain damage,” according to the book, left Andrew “paralysed [sic], unable to see and unable to recognize anyone.”

But Reach for the Stars is more about healing than the accident itself. For not only did Penman — who spent nearly a month in a coma and left the hospital five months later, potentially sentenced to life in a wheelchair — recover completely, but he did so without expensive drugs and extensive traditional medical intervention. Instead, he used positive thinking, self-determination and eventually the practice of aikido, tai chi and chi kung. The fact that “people with damage to the right temporal lobe are…also in a mildly euphoric state” probably also helped.

While Penman built up his strength through swimming, long walks, and simple exercises such as lifting weights, he also focused on healthy eating and keeping an active mind.

Anyone struggling to come back from a debilitating injury should find value in Penman’s diary. He details his progression and setbacks with honesty. But those reading for pleasure, amusement or to learn about lives and times unknown, will find the book a challenge, as it is full of repetition, typos, and unnecessary details. Most aren’t likely to be interested in the fact that Penman slept poorly the night of July 2, 2000; bought another pair of glasses the following November; or took a taxi home from his Japanese lesson.

Still, this book stands as a testament to persistence in the face of extreme adversity, illustrating that recovery can be accomplished without draining your life savings, relying on a wheelchair or other artificial devices, or bemoaning the rough hand that life has dealt you. Reach for the Stars flies in the face of all that.