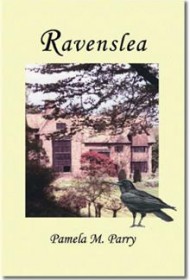 Ravenslea is a story about a place — a grand manor in the English county of Devon. But even more, it’s a story about the people who make that place what it is. Pamela M. Parry’s historical novel begins in 1833 and takes readers on a luxurious ride spanning more than seven decades and several generations of the family at Ravenslea.

Parry introduces her readers to the wealthy Thorncroft family, first through the eyes of impoverished Irish orphan Bridget O’Grady, who is forced to flee Ireland after her father’s murder in Dublin. When Bridget’s brother is jailed, she takes a job as nanny for the Thorncroft family. Her story is the first of three parts that draw the reader into a rich tale of love, murder, kidnapping, intrigue and tragedy.

Part two is told through another woman who enters the Thorncrofts’ world, Elizabeth Chandler, who cares for the wife of the heir of the manor. Part three takes an unexpected turn as readers learn about the Thorncroft family from another young woman, Catherine Ellison, hired to reclassify their library.

On the surface, the people of Ravenslea are cultured and caring. But underneath that veneer lurk greed, jealousy and dark crimes: a child is kidnapped, a family friend is murdered and a plot is hatched to take control of the manor.

Parry, a masterful storyteller, paints pictures with words and crafts dialogue that is neither overwrought nor dated — a difficult feat in a work of fiction that begins in early 1800s England. The story moves at a tantalizing pace and leaves readers with a clear vision of Ravenslea, typifying the best historical fiction.