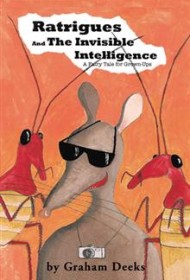 Tales starring anthropomorphic animals go back at least as far as Aesop’s fables. The most popular novel from this fantasy genre in recent years is Richard Adams’s bestseller, Watership Down, a saga that follows the travels of a warren of rabbits as it sets out to find a new home. Graham Deeks uses a similar premise as a starting point for Ratrigues and the Invisible Intelligence.

Thousands of rats, mice and cockroaches have lived in harmony in South Africa’s District Six for decades. However, this idyllic existence may be nearing an end because the district’s humans have a gentrification plan that calls for tearing down all the buildings and starting over with concrete slabs as a base. With all of that concrete, there will be no scraps for the animals to eat and no cubbies and crevasses to provide shelter for the rodents and insects. In addition, the neighboring Dockside rats have been decimated by poison gas, showing that danger lurks everywhere.

A delegation is appointed to scour the countryside looking for a new home. Ratrigues, a Portuguese rat on vacation, is enlisted as leader of the group, since he is an experienced traveler. Joining Ratrigues are two roaches that have the power of invisibility, a leader of the mouse contingency and the strongest rat among the survivors of the Dockside gas attack.

Deeks uses many painful puns and farcical situations as he keeps the ambassadors moving, and for the most part his narration is delightful. However, the adventures in the 35 episodic chapters are similar enough to become redundant. Also, if the friendships among these disparate characters are meant to be a metaphor for race relations in South Africa (as it seems), the conceit never quite works.

Despite these minor problems, Deeks succeeds in what he set as a goal in his “Author’s Note,” finding a balance between “absurd distraction” and “legitimate story line,” producing an enjoyable fantasy for children and adults alike.