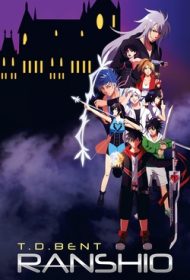 T.D. Bent’s sprawling fantasy epic Ranshio is billed as an anime novel, and it’s an apt description. Bent’s novel takes its mood, structure and aesthetic straight from some of the most iconic works of the Japanese animation genre that features dramatic combat sequences, complex mythologies and intricate plots.

The story’s hero is Koji Memotto, a 15-year-old dealing with the aftermath of the meteorite dubbed Ranshio hitting Earth, wiping out half of the planet’s population. Koji wields magical powers and supernatural fighting skills drawn from the mystical power of Ranshio, an energy source “bounded by the eight elements.” He can now heal the sick and read minds, among his other newfound abilities.

Koji brings these facets to bear as he battles dragons and stockpiles their claws, hoping to collect enough of these mystical talismans to reveal secrets about his father and his past. He’s also intent on finding the enemies responsible for the death of his family and the destruction of his hometown, which occurred in the lawless aftermath of the disaster. Along the way, he connects with other allies and draws a diverse set of enemies, ranging from mercenaries to dragons to superhuman villains also imbued with Ranshio-derived powers.

Bent’s love for anime is infectious, and the novel offers plenty of action and complexity, as well as the magical airships, powerful weapons, mystical beasts, drawn-out battles and personal grudges typical of anime. The author’s narration also contains some flaws, however. For example, he relies too often on the passive voice. The dialogue can feel flip and without depth; while a characteristic of anime, this becomes tiresome over 680 pages. Finally, the story tends to lose focus with all of its battle scenes, mystic monsters and futuristic technology, and the core story wanders.

The author shows much promise, but some revision is required for the story to reach its potential. Nonetheless, those willing to take this long narrative ride will find memorable and exciting moments.