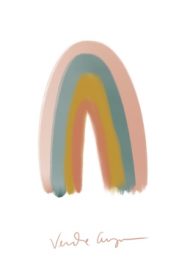 Verde Arzu’s Rainbow is a touching, coming-of-age story about learning to set aside other people’s expectations and live comfortably in your own skin.

Taylor is a hardworking basketball player at a historically black college who dreams of playing for the WNBA. After meeting fellow student Melony on a trip to D.C., Taylor is immediately attracted, but she’s not “out” to her teammates or her conservative family.

She and Melony begin a relationship, but Taylor’s fear of being outed culminates in a breakup. It takes a physical altercation and tough love from one of her teammates for Taylor to realize that her friends don’t care about her sexual orientation, they only care about her, finally giving her the self-confidence to commit to Melony.

This story highlights the lived experiences of LGBTQ people of color. Arzu’s prose skillfully plumbs the fear and uncertainty that LGBTQ youth often experience in the closet. We see this during Taylor and Melony’s first meeting, when Melony asks Taylor if all the girls on the basketball team are gay: “‘No!’ I defended with a nervous chuckle, and then rearranged my body in the bus seat, which suddenly felt cramped.” Arzu also doesn’t shy away from the intimate aspect of Taylor and Melony’s relationship, and the few sexually explicit scenes are tastefully done.

There’s a time-shift of many months in the middle of the story, which risks confusing readers. Additionally, the novella mostly ignores other aspects of Taylor’s life that could help develop her character, such as her classes and family. Occasionally, the dialogue rings hollow. When stating that George Bush doesn’t care about black people, Melony says, “If he did, he wouldn’t have been aloof and ignorant about the crisis that was visibly boiling over as [Hurricane Katrina] approached the Gulf Coast.”

Such issues aside, Rainbow is a poignant, important story about a young, black, queer woman taking ownership of her identity and her future.