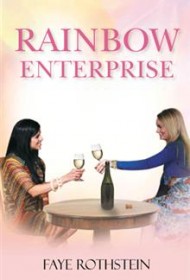 Rainbow Enterprise is a novel about a woman who finds herself sexually liberated after the death of her husband.

The unnamed narrator, who takes on the pseudonym “Ms. Blaze,” is in an unhappy marriage when the novel begins. Her husband shows little interest in her sexually, and Ms. Blaze is lonely. But when Ms. Blaze’s husband kills himself because of his own dark secrets, she is free to join her friend Liz in satisfying their most ardent desires.