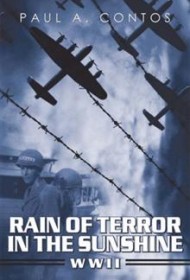 In Rain of Terror in the Sunshine, Paul A. Contos recounts what must have been an utterly terrifying day in combat as a soldier in the U.S. Army’s 71st Division. On March 13, 1945, he lived through 16 strafing attacks by German airplanes in eastern France, suffering extensive life-threatening shrapnel wounds to his left leg and hip.

“Must have been” are the operative words, for while this is a minutely detailed, almost slow-motion account of the day, we learn more about military hardware than we do about the terror raining down from those Messerschmitts. The book reads more like a sober military after-action report than a personalized story of the thoughts and emotions raised by what probably was the most frightening day in one man’s life.

There is plenty of blood in this story but the telling of it is bloodless. For instance, the author opens with an extended description of the characteristics and operation of the 57 mm anti-tank gun that is of little value to the general reader. He does the same with other war machinery.

This would be more palatable had it been combined with more human dynamics–his interaction with the other men in his unit and telling of their fears, hopes, ambitions, rivalries, jealousies. There is a little of this but not nearly enough. Several times, Contos hints at a grudge he has against his squad leader concerning something that might put him in danger. Intriguing, but readers do not learn more.

After relating his rescue from the battlefield, Contos continues his account through his surgeries and rehabilitation to his separation from the service in May 1946. Generally, the writing is solid and workmanlike, though marred by misspellings and unorthodox punctuation. At the end, he appends several simple poems to his promising, but unrealized narrative.