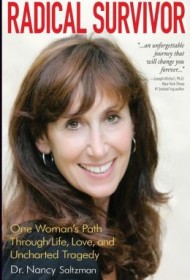 In this heartfelt memoir, Nancy Saltzman, a Colorado educator, weaves her life and its personal tragedies into a story of courage for others.

In 1995, with these dreaded words, “They found the plane. There were no survivors,” Saltzman entered a nightmare that would haunt her in the days, weeks, and years to come. Her husband Joel, the successful owner of a tennis shop, and her two sons Adam, almost 13, and Seth, 11, had been killed in a private plane accident, along with the pilot and his wife. The family had been attending a tennis tournament in Las Vegas and celebrating Seth’s birthday; Saltzman had flown on a commercial airplane because the private plane didn’t have enough seats. It wasn’t the first time her life had been upended. Five years earlier, at age 38, she had undergone a mastectomy for breast cancer — and when the cancer returned a short time later, a hysterectomy and chemotherapy.

Despite the unsettling subject matter, the memoir is candid, poignant, and even humorous at times. Saltzman displays no self-pity. Rather, she retraces her life to understand the inner resources that allowed her to keep putting one foot in front of the other. There are sad moments to be sure — she includes entries from Seth’s journal found at the scene — and conjures up some wrenching images for readers as she views the photos from the crash. But there is also a happy ending as Saltzman finds love again some 10 years later.

The book isn’t perfect — sometimes it reads like a personal thank you note — but there is much to glean here on how to behave when confronted with grief. In Nancy’s words, “My tools may not suit others. My lessons may be different. But here’s the secret: The simple act of reaching out and holding a broken heart with care and love is the most powerful help and comfort anyone can offer. And that’s something every single one of us can do.”

Also available as an ebook and audiobook.