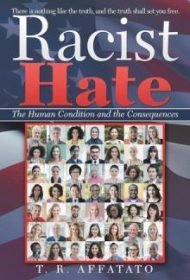 In Racist Hate, T. R. Affatato presents a scathing account of racism as it exists today and throughout history.  “[We] live,” he states, “in a world of racism that has been passed down through generations and throughout humanity.”

Affatato discusses some of racism’s roots, concentrating on those responsible for slavery, from the Greeks who enslaved their captured enemies, to the Dutch West India Company which “used black slaves to grow sugar for 175 years.”

He also expands his narrative scope to include conflicts and hate in general. Thus, he includes Assad’s violence against Syrian dissenters and criticizes religion as a source of hate and indulges in political bashing, characterizing Hillary Clinton, for instance, as a “diabolical, greed-driven liar” and Donald Trump as “filled with unabashed vitriolic hatred.” Despite his criticism of Trump, Affatato’s political stance is conservative and blatantly negative toward the left. “I do indeed believe liberal progressive Democrats are a bunch of selfish, greedy bastards…”

Affatato constantly challenges readers with phrases like “racism is in your genes, you racist,” which makes the point that we are all, including the author, prejudiced.

Unfortunately, the remedies he proposes are largely indirect. For example, he suggests that entrepreneurs and contractors should be given a period of tax-free status to rebuild abandoned portions of decaying cities. Although this remedy might give decaying neighborhoods a boost, it’s unlikely to do much to mitigate racism.

While Affatato’s passionate criticism of racism is admirable, his message is weakened by the book’s problems. The author frequently strays off-topic to explore things like his “philosophy about girlfriends” or the ethics of abortion.  He is often inaccurate (i.e. “…the story of Cain killing Abel, his evil brother” – italics used by reviewer for emphasis). And his rancorous language (“I could blow their fucking fag heads off”) will put off most readers.