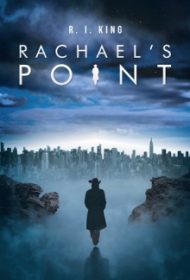 With Rachael’s Point, R.I. King delivers a thriller with a supernatural angle.

Rod Strickland was an accomplished black ops assassin working for the government, until one day he thought he saw an angel stop a school bus full of children from colliding with a semi and turned his life around.  Not only did he dedicate himself to God, but he became a world-renowned expert and lecturer on the subject of angels.

Rachel’s Point begins as Rod heads to his eponymous hometown to present his angel symposium and reunite with three high school friends. He hasn’t been back for 24 years, since he was accused of murdering his friend’s date, Darlene Poulardi, who disappeared on prom night and was never found.

Unbeknownst to Rod, Darlene and his supposed friends are part of the cult of Angerona, a fallen angel previously worshipped as a Roman deity.  Darlene has been given eternal youth in exchange for a sacrifice every eight years, which is the real reason Rod has been invited back. As Rod gets closer to the truth, with the help of a black duster-clad female who may or may not be an angel herself, the body count rises.

While King succeeds in his descriptions of small-town life, his characters tend to be stereotypical: the blundering police officer, the dishonest politician, the narcissistic class beauty, etc. Meanwhile, the story’s religious themes would be more effective if they were subtler. For example, out of the blue, a minor character tells her policeman brother, “’You need to accept Jesus as your savior now.’” He’s killed in the next chapter. Such heavy-handedness is typical throughout the book. Additionally, some facts are jarring: Isn’t it odd to hold a prom in October?

The concepts presented here are intriguing but wrapped in a didactic story populated by superficial characters. The novel ends with the possibility of a sequel. With a lighter religious touch and more layered, original characters, the author should find greater success.