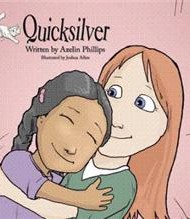 Azelin Phillips’ new picture book features a spirited girl who learns a lesson about good treatment of a pet.

When four-year-old Emily finds herself at loose ends, a diversion presents itself in the form of Oscar, the family cat. But Oscar runs away from Emily’s grabbing hands. A broken thermometer had recently prompted Emily’s father to tell her about mercury, also known as quicksilver. Emily decides that “Quicksilver” would be a more suitable name for Oscar, given his ability to “get through the tiniest spaces.” Then, Emily decides to “make Quicksilver pretty” by covering his fur with Vaseline and clipping his whiskers. Serious talks with both her parents alert Emily to the consequences of her actions, but in a humorous final twist, it appears that Quicksilver may not be so ready to forgive.

The book’s organization may not be optimal for its target audience. Long passages of text go by without illustrations to break them up, which might prove too much for young attention spans. Emily’s father’s explanation of the terms “mercury” and “quicksilver,” in particular, breaks up the action and might have been better placed at the beginning of the story.

On the other hand, Quicksilver conveys its lesson gently, making it suitable for children who have outgrown more didactic books, such as Elizabeth Verdick’s Tails Are Not for Pulling. Phillips portrays Emily’s motivations subtly and well. The girl means well, but she is also thoughtless and a bit disingenuous: it is clear from the illustrations that Oscar/Quicksilver is making his displeasure at Emily’s attentions known. Joshua Allen’s illustrations are pleasant and sometimes very funny, especially his depiction of the cat’s first glance in a mirror at his own reflection.

BlueInk Heads-Up: Though this is not a flawless picture book overall, it features a biracial couple. (Emily’s mother is white, and her father is black.) Such families are still fairly rare in the world of picture books, so this might be a valuable addition to libraries for that reason.