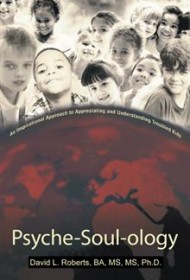 Organized religion has failed us in our attempt “to find God within our core nature,” and most programs meant to help troubled kids—especially faith-based ones—are a sham, mired in bureaucracy, authoritarian power-mongering and hypocrisy.

So writes veteran clinical psychologist David L. Roberts, who has worked for decades with at-risk youth—including hardcore gangbangers—and now offers his own formulas for lifting them out of the abyss. Roberts is writing “primarily for professionals working with kids,” but lay readers may also be intrigued by his ideal of “psyche-soul-ology,” which gives this engaging but repetitious book its title. In a nutshell: the practice of psychology must be essentially spiritual and seek to unite a client’s mind and soul “in a symphony of harmony” because God and goodness are within every person.

Roberts equates his practice to “a ministry” and illustrates his work with a series of vivid case studies, such as the story of “JJ,” a bright teenaged gang member charged with murder who was seemingly transformed with Roberts’ help.

After eight years working for the Riverside County Department of Mental Health in southern California, the author was abruptly ostracized, he says, for blowing the whistle on staff members who were abusing kids in juvenile facilities. In 2004, he returned to his conservative hometown of Mobile, Alabama, and brought with him some California-nurtured New Age ideas: He uses hypnosis and his “intuitive psychic skills” in his clinic and claims he is “sometimes a medium with the kids I serve.”

Roberts concludes that his generally clear and well-written text is “Divinely Inspired.” This, and some of his more controversial ideas, could raise eyebrows among some readers. Still, it should be fruitful reading for mental health professionals, youth counselors and anyone else interested in the mysteries of psyche and heart.