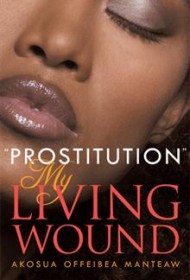 Part memoir and part inspirational self-help, this book tells Akosua Offeibea Manteaw’s story of being bullied throughout her university years after being spotted in a car kissing the man who ultimately became her husband. She was instantly branded as a prostitute, a label that stuck. Ultimately, she found her way to spiritual healing that pulled her out of the darkness.

The author describes some of her unsuccessful attempts to face the bullies: deciding she would wear whatever clothes she wanted no matter what they called her; walking quickly through the classroom with a no-nonsense face; answering back when others were hostile. None of these tactics worked. Her fiancÃ© was gone for two years, so she was alone much of the time and wary of making friends. The author had time for reflection, though, and she learned to face the people who decried her by discovering the way to goodness in herself.

The book explains her healing process, what she calls The Golden Transformation. She defines this for us as the stages she goes through – Rejection, Reflection, Direction, Desired Destination. She relies on material from sources ranging from the New Testament to Mark Victor Hansen of Chicken Soup fame, offering readers a foundation for the enlightenment she found. Prayer is important to her; belief in God is essential.

Manteaw is a Ghanaian national, which is key to her story because her early childhood shaped her character and gave her some of the tools she instinctively turned to when she felt so troubled.

Illustrations are missing. Poems that begin and end the material add little to the book. Yet the inspiring narrative shines through and we connect to the author as she passes on her experiences. Those who read books with Christian themes to find inspiration should add this to their collection.