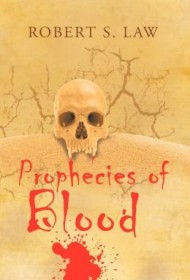 A crowded metropolitan pub called The Aged Church becomes the venue for an old man’s prolonged, twisted fable about the underground world of vampires in this debut by military veteran Robert. S. Law.

One of the core principles of modern fiction writing has long been, “Show. Don’t tell,” a technique that allows readers to experience a story as if first-hand, rather than trudging through a writer’s description of events. Unfortunately, Law frames this novel in violation of that axiom.

The novel is presented as one long story told by a stranger to the crowd at the Aged Church. His introduction is a painstaking history of the vampire race, their powers, weaknesses, and traditions. The central figure is an overlord called Dominus Sollis Digenes. Sollis is in possession of a “Book of Prophecies.” The tome details an arcane divination about the first vampires forced into combat with “The Ultimate One,” a battle that is supposed to conclude with the winner gaining enough power to destroy anyone who opposes him.

Moving along, Sollis rapes a young teenage Catholic girl. She is then thrown into a medieval iron maiden until she can bear Sollis triplets, and then dies. Of the three boys, Lucas is the strongest candidate to become The Ultimate One. His brothers Julius and Nikolias, while athletic, don’t possess the blood lust of their younger brother. From here, the story plays out with a cursory predictability, involving Lucas’ rise to power, a worldwide vampire insurgency and the pivotal conclusion of the old man’s story.

Law concocts an exhaustive milieu for all of his gods and monsters, which adds to the frustration of the novel’s lagging pace, lengthy narrative explications and drought of dialogue. Fans of straightforward horror stories will want to shy away from this convoluted saga, while those who relish more intricate fantasy series might recognize their tastes here. Even so, this is a yarn for only the most bloodthirsty and patient readers.