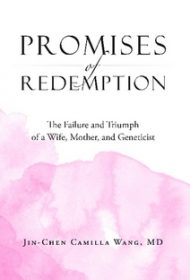 In her memoir, Promises of Redemption, Dr. Jin-Chen Camilla Wang recalls her family’s escape from China to Taiwan, her many accomplishments as a researcher and clinician in cytogenics (diagnosing chromosome abnormalities and genetic counseling), as well as her personal successes and challenges.

In 1949, four-year-old Wang escaped from China and Communist rule with her mother to Taiwan, where many members of the Nationalist Party (Kuomintang) fled at the end of the civil war. Eventually, she attended medical school in Taiwan and pursued a PhD at Purdue University in Indiana.

Wang soon married an aerospace scientist, and due to her husband’s career, the pair moved often, Wang taking available medical positions. In 1981, she began her research into genetic disorders at Massachusetts General Hospital and soon became a cytogenics researcher and clinician at the Genetics Institute (later Alfigen) in California. During her impressive career, the author made significant contributions to the growing field of cytogenics and chromosomal abnormalities, describing her work as her “endearing life-long career.”

The author also shares the academic accomplishments of her two sons, her diagnosis of colon cancer in 1998, and her divorce in 2000. She eventually found love with her second husband, noting: “I felt safe, and I felt liberated.”

Wang writes in an unadorned, factual style, relating her remarkable achievements as simple facts with neither hubris nor humility. While she attempts to translate clinical details into layman’s terms, her explanations may be lost on some readers. Additionally, she holds back detail regarding her first marriage (including the omission of her husband’s first name), leaving an obvious gap in the narrative. More personal insights would have been a welcome addition throughout.

Overall, Promises of Redemption lacks the artistic flair and narrative drive required to attract a general audience; however, Wang’s family and friends will surely treasure these recollections of her life’s journey and accomplishments.