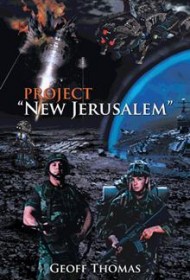 In Geoff Thomas’ slim novel, robots have taken over Earth, and the last few human survivors are running out of resources. All military personnel, they embark on a risky plan to reach the Moon and Mars colonies, despite the complete loss of communication between the planets.

Meanwhile, the robots are planning the final annihilation, and on Mars a young psychic is being groomed by his grandmother to use his abilities, as he will become important in the survival of the human race. The Martian colonists have no knowledge of the “Great War,” and only the grandmother and her grandson seem aware that there are also extraterrestrials monitoring the situation.

Thomas uses familiar tropes (man creating sentient robots who turn on them; a trip to Roswell to retrieve an alien spacecraft; a shocking discovery of a brilliant but potentially dangerous scientist in the hold) but rather than seeming unoriginal, his brisk writing utilizes them to quickly bring readers into the story. The narrative has immediacy, the alternating points of view create a sense of urgency and tension, and although swiftly drawn, the characters come to life.

However, a lack of editing results in distracting repetitions (the word “now” appears five times in a single paragraph, for example), as well as punctuation and grammatical errors. The anachronisms (would a character still be quoting Star Trek and Dr. Who in 2112?) and the use of “we” and “us” in an omniscient narrative may also disturb some readers.

A bigger problem is that this isn’t truly a novel — it’s merely a set-up for a sequel. The story builds well, introducing multiple conflicts and establishing the dangerous times ahead, but it has no conclusion. A first book in a series, as this is conceived, still needs a story arc with a resolution, while leaving the reader wanting more. As a result, this is an intriguing but ultimately frustrating read.