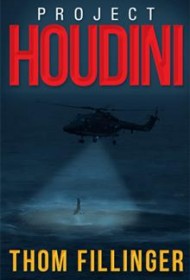 An exploration team swallowed up by the Bermuda Triangle, intense government secrecy and a dogged reporter and editor are the elements that drive this likable novel set in the present day.

Through a twist of fate, journalist Alan Maxwell is selected to join a unique group of scientists in an endeavor dubbed “Project Houdini. Their mission? To determine why ships and planes keep vanishing into the mysterious Bermuda Triangle.

They, too, disappear, but then Alan unexpectedly reemerges with a startling tale to share. Editor Harry Konenberg is anxious to publish the story but is road-blocked by the government, which wants to cover up the truth and is willing to brainwash Alan to do so.

What follows is an action-packed tale as Harry races to get the final audiotape that Alan recorded about his experiences before it is destroyed and to also find Alan, who has been whisked away. Between these scenes, the story reveals details of the group’s amazing adventure, which involves a hidden twin area of Atlantis that exists in another dimension and harbors eight-legged, dinosaur-like creatures, as well as treelike “plantimals” that move and communicate.

Brisk pacing, foreshadowing and fluid writing keep readers moving forward. Many scenes are imaginatively drawn (though a few feel as if they were plucked straight from an Indiana Jones film).

Some minor issues: While the book’s protagonists are distinctive, Alan and Harry never really connect emotionally with readers. In addition, the author is a bit heavy-handed with exclamation points. Finally, although the story features a dramatic climax, the opening pages are mundane, and the thin ending leaves unanswered questions about the mysterious dimension.

Readers are likely to overlook such flaws, however, as Project Houdini delivers a page-turning story that will please fans of escapist novels or beach reads.