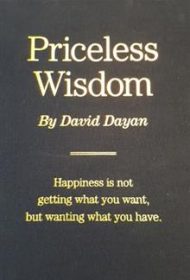 In Priceless Wisdom, David Dayan offers quotes and sayings, including those from Jewish religious texts, Ben Franklin, Abraham Lincoln and Ludwig van Beethoven, as well as unattributed snippets of wisdom.  Occasionally, he allows a saying to stand on its own; other times, a hand-sketched illustration accompanies the quote and often, Dayan shares a story amplifiying how he perceives a particular piece of wisdom.

Dayan emphasizes traditional values, from choosing a spouse with a similar spiritual background to opening doors for others. Common themes include the importance of hard work; of not loving wealth and material possessions too much; and his belief in Gam zu l’tovah, translated as, “This, too, is for the good.” And he doesn’t always focus on big themes, believing in the importance of a good handshake and choosing the right tie, for example.

We get glimpses into Dayan’s life, including a fire and a flood he experienced; his love for his wife, four children, and 11 grandchildren; and the name of his childhood best friend: Chubby. Their relationship is succinctly defined in this way: “We don’t agree on anything, so it’s amazing we like each other so much.”

Sometimes, Dayan’s words to the wise seem overly familiar (“‘Everything in moderation’ is the best way to live”), and occasionally, he leaves out information that seems would have been good to know. For example, he describes his father as a “tough young man” who, at the age of 13 needed to be shipped to the U.S. from his Syrian homeland because there were rumors he would be killed. Readers are left to wonder why.

Although this is not a book of devotionals, Dayan’s Jewish faith is woven throughout, as he shares a prayer, his favorite Proverbs, the Ten Commandments and more. While some readers will wish he had gone deeper and shared more of his hard-earned experience, others — particularly those who feel a return to traditional values is needed  — will find this book refreshing.