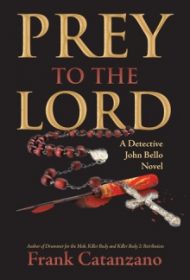 Author Frank Catanzano (Killer Body 2: Retribution, 2014, etc.) imbues his police procedural about a serial killer on the loose with just a touch of the paranormal.

In a prologue, we meet our hero, John Bello, in the Vietnam jungles circa 1974. A head injury instills the young soldier with “Acquired Savant Syndrome,” a kind of sixth sense that allows him to reconstruct events after the fact. Years later, Bello is a hardheaded Pittsburgh police detective heading a task force tracking a serial killer. As events unfold, we learn that the killer is a self-flagellating, deeply insane member of the Catholic faith who believes he’s acting on God’s word.

His crimes become increasingly violent: a beloved children’s television host is stabbed with an ice pick; a priest is killed in his church; a sexual deviant’s eyes are plucked out in a seedy video booth, etc. Soon, one of Bello’s own officers is murdered while tracking the killer.

Using his strange abilities, Bello eventually learns that what connects these victims involves child pornography and, perhaps, one of the city’s most cherished institutions.

This is a well-paced story, although its moral stance can be mildly puzzling; while the narrative firmly disapproves of the killer and his victims for their lack of morality, supporting characters sometimes display attitudes that, while less egregious, are also questionable. For example, the story seems to approve of a character hiring a prostitute; Bello regularly picks up women for casual sex and is described by a neighbor as a sex addict; there’s some latent homophobia among the cast.

Nonetheless, this is a solid read. Catanzano’s writing is crisp and engaging, recalling Bret Easton Ellis’s American Psycho for its sinister portrait of a killer and James Ellroy’s L.A. Quartet for Bello’s stubborn police pursuit. Most of all, it evokes the Burke detective novels by Andrew Vachss, the crime writer and child protection consultant. Readers will savor the similarities.