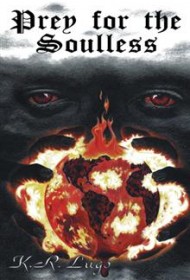 K.R. Lugo’s novel Prey for the Soulless is set in a society of the not-too-distant future that has lost its moral conscience.

The story begins as two gladiators fight to the death in combat reminiscent of ancient Rome. Thousands cheer on the blood sport in person, while billions more watch on high definition flat screens and gamble on the outcome.

In the next match, the stakes grow higher as Jason White (aka Ramses), the gladiatorial champion with over 500 kills to his credit, claims to have found God and refuses to fight. He is summarily blown to bits by snipers. After a moment of hushed shock, the bloodthirsty crowd cheers just as lustily for the assassination as they did for the gladiatorial combat.

In Lugo’s world, the Constitution has been amended to allow the Games to satisfy the sadistic pleasures of the population. Big business, led by Marcus Powers, the world’s richest man, has taken most of the power from the government, and the Earth seems headed for the end-times. It appears that the only ones competing with Powers are the bosses of organized crime.

While the author has a gift for pacing and description, portraying the gore of the battles in meticulous detail, the novel has two major faults. First, there’s no protagonist with whom readers can empathize. Every character is a “bad guy”; some are just more evil than others. For the novel to join the ranks of the great apocalyptic stories such as Stephen King’s The Stand, there has to be someone to root for. Second, Lugo introduces several plot elements that are never developed. (For example, Powers plans to run for president, but he never does.)

Still, in an age when video games celebrate violence for its own sake, a book that relies on graphic violence should find its niche. Readers who are solely interested in action may enjoy the novel, as Lugo displays considerable talent in this regard.