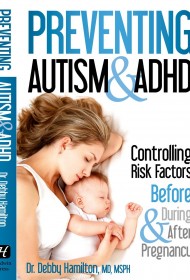 The statistics on autism spectrum disorder are staggering. According to data from the U.S. Centers for Disease Control and Prevention, the number of diagnosed children rose from 1 in 2,222 children in 1982 to 1 in 50 in 2013. Cases of attention deficit hyperactivity disorder (ADHD) were up 22% from 2003 to 2007. Dr. Debby Hamilton’s highly informative book discusses what she believes has changed to cause an explosion of these disorders and what can be done to control risk factors before, during and after pregnancy.

Hamilton runs an integrative pediatric practice in Boulder, Colo., and has treated hundreds of children with autism and ADHD. Before writing the book, she pored through evidence-based research studies in areas including food processing and additives, environmental toxins and consumer products to guide her in developing this treatment plan. Though her disclaimer says the information is not meant to render medical advice — in a field obviously wrought with controversy and uncertainty — Hamilton focuses on three areas that she sees as key to reducing risk factors for the disorders: a healthy and nutritious diet, strong digestion and detoxification.

In clear and concise text, the author covers published research data on everything from the negative effects of genetically modified foods, endocrine disruptors, trans fats and preservatives to dangers of cell phone exposure. She discusses perinatal risk factors linked to autism, the mother and infant’s critical dietary needs during the baby’s first year, what moms need to know about vaccines as well as details such as toxicity associated with certain types of pacifiers and baby bottles.

This well-organized and easy-to-follow book professionally documents references, has a handy list of acronym definitions and includes a table of contents and index. Despite the great detail, the information never obfuscates. Preventing Autism & ADHD provides a valuable resource for women interested in doing all they can to lower their children’s risk of autism and ADHD.