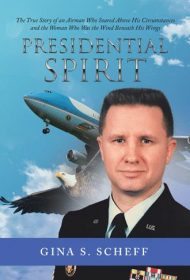 Presidential Spirit is Gina S. Scheff’s remembrance of her late husband, David, who served in the Air Force for 24 years and rose to become the head of maintenance for Air Force One.

Readers hoping for stories about David’s duties and anecdotes from his days with the presidential detail may be disappointed; the author doesn’t provide them. Instead, we have one woman’s paean to the man she loved deeply until his death at age 51 from a rare and aggressive form of cancer.

Presidential Spirit consists of 28 short chapters that describe her life with her husband, followed by six appendixes (tributes from others, a summary of his military record, a speech he delivered, an article he wrote, etc.).

The book’s first half describes the good times of their 23-year marriage, including how they met, fell in love, married and embarked on a seemingly idyllic life. The second half is more somber as the author details David’s determined six-year fight against a rare type of cancer.

What’s consistent throughout the book is the author’s unwavering love and devotion to her husband. Not a page goes by that she doesn’t emphasize what a terrific guy he was—a man who went out of his way to be the best husband, family man, neighbor and co-worker he could be. “Maybe I brag about David too much,” she writes, “just talking about him makes something inside me light up, and I was proud to be married to him — my prince, my hero, and my soul mate.”

This book is a deeply personal tribute to David Scheff. While David and Gina’s love story will appeal to some general readers, it would have interested a wider audience had it detailed his duties and offered some anecdotes from his Air Force One days. Still, it’s a lovely account from one woman to the man she loved deeply.