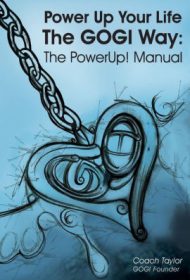 In a sea of self-help books, it’s rare to find one that originated in a setting as poignant as a prison. Coach and Strategist Taylor’s Power Up Your Life the GOGI Way, leaves us asking: If the GOGI principles work for those behind bars, why not for the rest of us?

Short for “Getting Out by Going In,” the nonprofit GOGI organization was created by incarcerated men and women who Taylor met as a prison volunteer. The “GOGI way” is now used by AA members, police officers and others to help all kinds of people implement positive decisions. Taylor describes GOGI as “the journey of getting out of our own prisons by going inward for the answers.”

The author divides Power Up into four sections: “The GOGI Tools,” “The GOGI Way,” “The Faces of GOGI” and a “PowerUp! Manual” to guide community meetings. Short conversations with prisoners and at-risk students appear occasionally, but the book primarily offers advice.

Many of the tools, such as breathing deeply and claiming responsibility, are not new and are repeated throughout the book. In fact, Taylor apologizes for any redundancies, warning that her book is “not clever” nor does it offer magic fixes. But it’s the repetition, along with Taylor’s straightforward advice and deliberately simplistic writing that make this book effective. It’s so easy to use, she asserts, that when tested among kindergarteners, all could follow the instructions.

Additionally, Taylor manages to put a fresh spin on practical solutions with methods like the “Five Second Lightswitch” that trains the brain to move from a negative to a positive thought, and the “Hand/Squash/Toss” technique of figuratively squashing negativity in the palm and tossing it away.

Taylor’s prose isn’t perfect, and she sometimes refers to concepts she hasn’t yet explained. But her sincerity makes up for such errors. Power Up isn’t just for those seeking to purge past habits, but for anyone who wants to live more fully, with calmness, clarity and self-control.