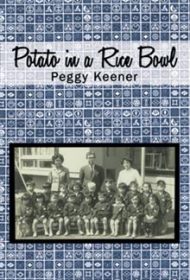 As the dutiful wife of a U.S. Army intelligence officer, Peggy Keener went wherever her husband Glen’s assignments took him—most notably to Tokyo, in the mid-1960s. This lengthy memoir details the writer’s culture shock and her outsider struggles with Japanese custom, language and cuisine.

With a two-year-old and 10-month old in tow, the writer tried to settle in. She ably details discovering the joy of raw sea urchin, the horror of Tokyo’s “abysmal” public toilets, and the twin stings of high-cost housing and local resentment: “Go home, Damn Yankees!”  reads a sign outside the Keeners’ suburban duplex. She’s baffled by Japanese PTA meetings and touched by her downtrodden housekeeper, Sakae-San. She even lands a temporary job as an English tutor on Japanese TV.  “Japan had struck me through the heart,” she writes. Her affection is clearly genuine.

Through it all, Keener makes for a lively, humorous companion with a knack for painting vivid scenes. She peppers her narrative with amusing anecdotes and quotes from famous and unknown sources that often bring a smile (“I will never repeat gossip, so listen carefully the first time.”)

This self-described “smalltown bumpkin” from Minnesota (“Double sheesh!” “Mercy me!”) can also be insensitive, which some readers may find offputting. She sees Japan as “an anthill of clones” and indulges ethnic stereotypes that seem more inadvertent than malicious. In the countryside, the Keener clan encounters a Japanese farmer and his family, and the memoirist cannot resist reading their “oriental” minds. Of a startled Tokyo clothing store owner, she writes: “his eyes fulminated into twin explosions, protruding much further from their sockets than Buddha had ever intended.” Try as she might, this Midwestern potato never really found common cause with rice.

Despite the stereotypes and a gee-whiz attitude that can be wearying at times, Potato in a Rice Bowl takes readers on a journey through an interesting life and time. Readers will find Keener an affable and entertaining guide.