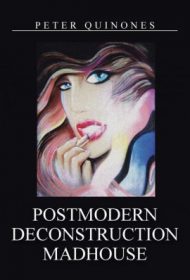 Peter Quinones’ Postmodern Deconstruction Madhouse is a unique collection of short stories and essays that offer an eclectic mix of character studies, Shakespearean analysis, and film and literary discussion.

Quinones’ opening stories, including “The Fizz Notorio” and “Burn Series,” focus on mismatched couples and diverse, intriguing characters—from a young woman drawn to an older man and his grand collection of Chinese fortune cookie papers, to another who writes letters to long-gone celebrities and fantasizes about “The Boy” she sees on her Staten Island Ferry commute. These slice-of-life tales often take place against a detailed backdrop of NYC culture, complete with lavish dwellings and quirky restaurant haunts. While the characters and their actions creatively move the stories along, unfortunately some end abruptly, leaving unanswered questions.

“The Exousia” is an imaginative murder mystery told through eye witnesses that at some point crossed the victim’s path, while “Notes on MACBETH” is written from an analytical perspective, comparing the play’s plot and characters to four different film versions.

Quinones’ unique title story is divided into two segments. Part I features an unusual and witty format: 98 one-sentence stories with artful narratives. (“She has a smile like an angel but a soul like nitroglycerin”; “We spend one seventh of our lives on Tuesdays”). Part II delivers film criticism centering on the J-horror film Shutter and literary commentary encompassing Irwin Shaw’s 1969 Rich Man, Poor Man, Ross Macdonald’s Lew Archer novels and others. While the section’s final notes are informative, they can be offputting, as they require flipping to the initial reference, then back again.

Quinones uses a broad range of uncommon words and phrases (“He smiled— a consuetudinary fleer of resignation and of circumstances”), so readers may want to keep a dictionary handy. Also, it’s unclear who the book’s exact audience is, given its unusual mix.

Still, for those who enjoy short stories with an avant garde edge and vocabulary that challenges,  this volume offers an enticing foray.