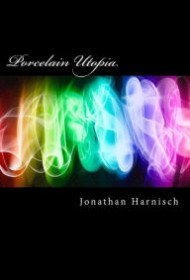 In Porcelain Utopia, prolific novelist Jonathan Harnisch again features his recurring character Ben Schreiber, a troubled young man who has been hospitalized in a mental health facility after attempting a bank robbery while under the influence of drugs and is now under the care of Dr. C, his new psychiatrist.

Like the author, Ben has been diagnosed with a number of physical and psychiatric disorders, including Tourette’s syndrome, borderline personality, and schizoaffective disorder, to name a few, and Dr. C believes that having Ben work through his relationships with the characters in his head will lead to a breakthrough of sorts.  She encourages Ben to explore on paper his experiences with his alter-ego Georgie Gust, Georgie’s girl (and obsession) Claudia, and numerous other people, as well as his family. Meanwhile, Ben longs to make his mark and sell his experiences as an autobiography. Through his writings, diary entries, and sessions with Dr. C, Ben explores the ideas of reality, perception, morality, sex, spirituality and love.

Through prose that is gritty, raw, and vulnerable, readers are instantly transported into Ben’s world. His tics, hallucinations, and mania leave one feeling uneasy, yet sympathetic to Ben’s plight. All of the characters are endowed with distinct voices and relatable and intense emotions, and come with an inherent and undeniable charisma. As a result, readers are never certain who is real and who is an hallucination.

Harnisch’s novel has many moments of explicit, even disturbing sex, which some readers may find offensive.  However, these moments tend to feel organic to the characters and more introspective in execution than gratuitous.

Although suffering occasionally from editorial mistakes (e.g. dropped words, formatting issues), Porcelain Utopia is a satisfying and moving reading experience —a gripping account of one man’s difficult quest for self-acceptance and belonging.