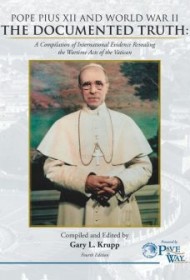 This book looks to offer an alternative hypothesis to those writers who have concluded that Pope Pius XII (papacy: 1939-1958) was an accomplice in the horrors of Hitler’s Holocaust. In doing so, Gary Krupp has assembled in this volume an astounding amount of primary source material.

Pope Pius and World War II includes reproductions of the original copies of handwritten and typed letters, newspaper articles, press releases, identity papers, photographs, snippets of interviews, and more. This evidence, as well as the author’s detailed annotations, serves to challenge the prevailing historical assessment of Pius as being, in the words of one author, “Hitler’s Pope.” Instead, Krupp concludes that “Pope Pius XII was neither an anti-Semite nor a Nazi collaborator.”

This mass of primary source material does help Krupp make his case. Among other documents, Krupp includes a November 30, 1938—three weeks after Kristallnacht—telegram from Pius (then Cardinal Pacelli) to more than 65 bishops, instructing them to obtain 200,000 visas for Jewish refugees. He also includes 1943 telegrams and responses expressing the concern over 460 Polish rabbis, and copies of false baptismal certificates and identity papers the Vatican distributed to Jews to save them from deportation.

The book is not well served, however, by the material’s presentation. While physically attractive, and printed on high quality glossy paper, the vast majority of the documents are reproduced so small that the print cannot be read. Many of the documents are in German or Italian, and most come without translation. While Krupp’s annotations pointedly make his arguments, readers will have trouble finding support for those arguments in documents they can’t read for themselves.

Despite its physical and interpretive flaws, this is an important book. Krupp offers us a starting place for those who wish to develop for themselves a fuller biographical view of Pius XII, as well as strive for greater balance in an understanding of this volatile episode in the history of World War II.